It’s come to that time of year when I work out which of the – gosh – nine varieties of tomato I tried this year are worth growing again and which – if any – is the winner of best in show.

First out of the box is Sweet & Neat, a teeny, compact bush with yellow cherry tomatoes. You only get four seeds in a pack so I sowed all four. They all came up and I planted them in the Horse Trough with the runner beans.

I lost one plant to blight, but the other three were compact, healthy plants that cropped heavy, lemon-coloured cherry size fruits.

The verdict: Well, they’re neat, but frankly, they ain’t sweet. They’re watery and bland, and although they take up very little room on the plot and crop well, they’re just not nice enough to try again. I’ve been mixing them in with other things as a bulker-out in the kitchen. Score: 4/10

Staying with  cherry toms, next came Tumbling Tom, both Red and Yellow. They’re a bit of a stalwart but I’d never grown them before. I put several window boxes on the sides of beds (being on a steep hill, there is often a two-three foot drop one side). They grew well – too well. The window boxes quickly became outgrown and the plants dried out constantly. Interestingly others, that were in deeper soil and grew lushly (not like the manky ones in the picture) had lots of leaf and very little fruit.

The verdict: A game of two halves here. Tumbling Tom Red was instantly forgettable. Neither awful nor nice, they join the Sweet & Neat as bulking-agents in sauces. Score: 3/10

Tumbling Tom Yellow was a different beast altogether. Sweet, juicy, a satisfying dark yellow colour, flavoursome and prolific. This is a keeper, only next year I’ll just put one plant in each window box. A mix of the two make good bruschetta. Score 9/10 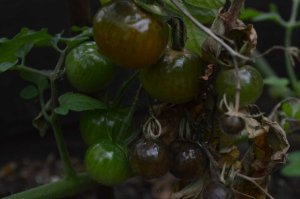 Red Pear was a front-of-a-magazine freebie. It’s an heirloom cherry, pear-shaped (naturally) and supposedly plentiful. It grew well to start with and was developing interesting, pear shaped cherry fruit. Sadly this was where everything began to get pear shaped in another sense of the word.

I always forget that ‘heirloom’ pretty much always means ‘not blight-resistant.’

Blight took over in mid August. Every single plant had to be burned.I won’t bother again, it’s just too risky. Unscored.

Sweet Million is an F1 that’s supposed to crop over a long period, and have, as the name suggest, a lot of babies. I’m afraid I’ll never know, for this, too, despite promising -looking trusses, died en-masse and had to be burned. Unscored.

I like sun-dried tomatoes, so I was intrigued to find Principe Borghese. You can eat the cherries from this determinate bush as vine-ripened or pull up the whole plant when the cherries are ripe, hang it upside down and enjoy air-dried (we don’t dare hope for enough sun for the real thing…) tomatoes in the autumn. Unscored.

Well, that’s the theory, anyway. In reality I had to raze the lot, which joined the Red Pear, Sweet Million and Sweet & Neat on the Blighty-Boys-Bonfire.

What on earth made me even try Gardener’s Delight? I KNOW it gets blight. It was the first to succumb to the flames. Unscored.

I wanted a beefsteak and Red Bodyguard came free on the front of Grow Your Own magazine, so I thought I’d give it a try. It’ was supposed to have some blight resistance, and be ‘tasty’ but they all claim that.

The verdict: In fact, it stands up well. In the bed it had shared with the Blighty Boys, one plant survived and cropped well – very well, with large, beefy toms that tasted good; succulent and grown up. I will definitely grow this one again. Score 8/10

Then there was the Great Red Hope. I trialled one blight-resistant tomato, Crimson Crush, recommended by James Wong, who reckoned it has a great taste and the only reason he didn’t include it in Grow For Flavour was because he hadn’t finished trialling it when the book went to press.

The verdict: Now, I have to ‘fess up. I was sent three grafted plants so of course they were going to be strong, but these fellas have been the star of the show all season. Not a sign of blight, gigantic beefsteak tomatoes that have to weigh 500g each and with a truly decent flavour. Slightly tough skins, but you’d expect that on a beefsteak and I remove the skins anyway. These are going to be my new replacement for the large, blight-proof-but-bland Ferline F1. I will definitely grow Crimson Crush next year. Score 9/10

I was also sent one grafted plant of Crimson Cherry, the cherry version of Crimson Crush, but the plant was always weedy and it didn’t produce a single fruit. Given the spectacular results with Crimson Crush, though, I am prepared to give Little Crimson Brother house room next year (especially given I didn’t grow one red cherry tom I actually liked this season.) Unscored.

I’m also trialling the Top Secret Variety TomTato® but that’s still producing so I won’t give a full verdict yet. The good news is that it doesn’t have blight (yet) but the jury is very much out for the moment.

And the winner? Crimson Crush, for sheer burliness balanced with size and flavour, though Red Bodyguard snaps at its heels. I shall grow them both next year.

It’s strange – I must have lost 70% of my tomatoes to blight, but I still have what many would call a glut, with the Tumbling Toms and the two beefsteak varieties producing ye olde cliche of the ‘bumper crop.’ Frankly, despite the godawful spring, it’s been another good year. What? A gardener not moaning about the weather? Whatever next…