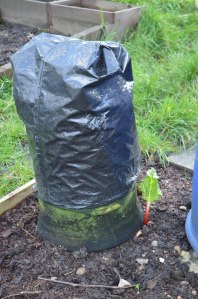 I put the forcer over the burgeoning buds back in late November- normally they’re not even showing ’til January.

It’s a rather lovely terracotta forcer I bought for home, but my garden faces north-east; rhubarb there just never got enough sun to flourish.

I cover the forcer in black plastic, held in place with the waist part of an old pair of tights, as it looks a bit nickable on the plot. It would be crazy to use something else when I have a purpose-built forcer, but a shame not to have it looking as lovely as it should. A plus-point, of course, is the black plastic helps to warm the plants inside.

Truth is that if it was pinched the thief wouldn’t get very far with it as it has a massive hairline crack down it; it would break before they got to the top of the hill, they’d dump it and I’d be left with a load of unusable crocks. Sigh. 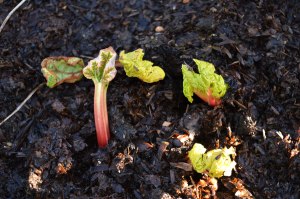 All four plants have been bursting forth, even the one I only put in last year. It helps that the bed is now raised, dug with a lot of manure and mulched with it too.

It also means I can keep a close eye on weeds – when I first took on the plot there used to be a prolific lemon balm, which despite being dug out as thoroughly as possible still sprouts, along with the usual horsetail, bindweed and a strange plant from my neighbour’s plot that is determined to invade.

The variety is Timperley Early – I decided to make all four the same so I could take a few sticks from each without exhausting a single plant. It’s one of the classic varieties used in the forcing sheds of the Rhubarb Triangle for ‘champagne rhubarb’. I rotate forcing over four years, to prevent exhaustion, though to be honest the plant I forced last year is easily the strongest this year. Go figure. 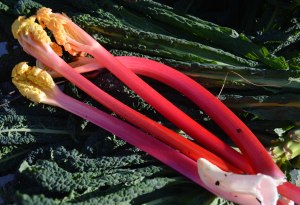 The plot being on a hill, it’s very (read ‘too’) well-drained and it’s taken a long while to get the patch to work. Manure is my friend.

Seriously, folks, even in the city there are stables, and most of them produce far more horse-muck than they can keep up with. Some sell it, but most are only too happy for amateur gardeners take it away. Phone around; you’ll find someone, honest. If you don’t have transport, chat up the other allotmenteers and work together. It’s so much easier when someone’s holding the bag while someone else shovels.

Forcing is simple – just stick a forcer or bucket over a new batch of buds, keep it warm and let it do its stuff for a couple of months. On my last allotment the patch was so hefty I even used a spare compost bin.

I have a ritual – the first event of the year is always rhubarb crumble, with home-made vanilla ice cream. It needs virtually no sugar.

Those first few sticks, bubble gum pink and sparkling like seaside rock, are tender and sweet enough to convert the most disgusted rhubarb-hater, but this year I noticed something more. They tingle on the tongue, like kiddies’ sherbet dabs. Perhaps that’s why they’re called ‘champagne’?