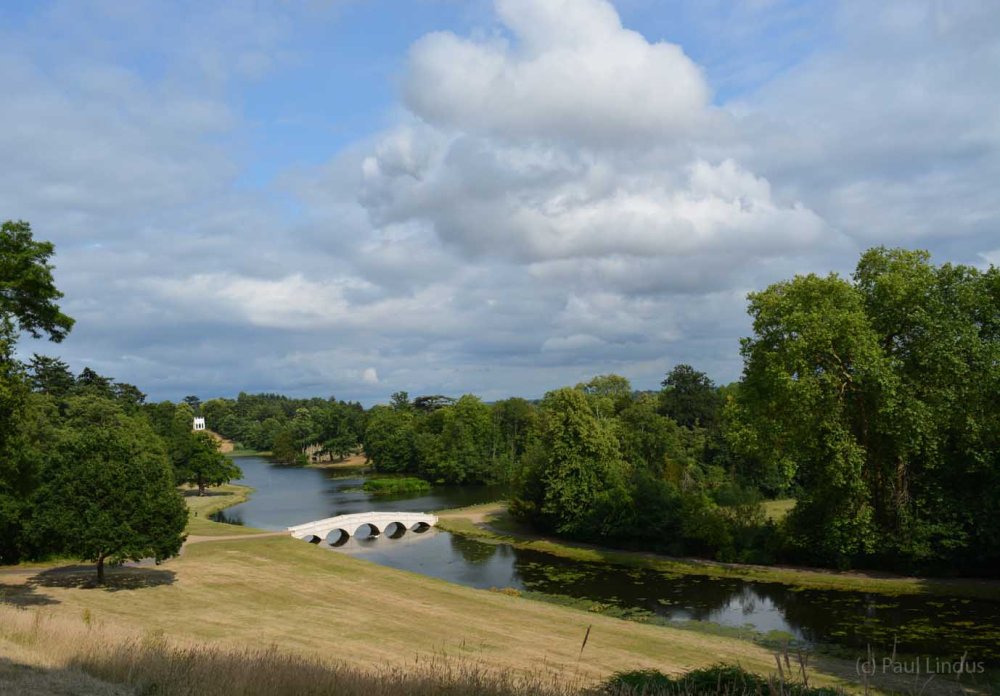 Painshill Park Landscape Garden in Cobham, Surrey, is an 18th Century fantasy of gothic follies, Arcadian vistas, woodland dells and mysterious grottoes, yet by the mid-20th Century it had crumbled to invisibility.

Estate Manager Mark Ebdon, who began work 33 years ago as a trainee, still remembers his first day. “It was just woodland,” he recalls. “It took a whole day to drive up to the Gothic Tower as we had to cut our way through. I was faced with 160 acre wilderness and equipped with just a bow saw and a mattock.” Workers didn’t even realise that somewhere inside the forest, an enormous, serpentine lake provided the centrepiece of a lost pleasure grounds to rival horticultural superstars such as Stourhead, Hestercombe and Stowe. 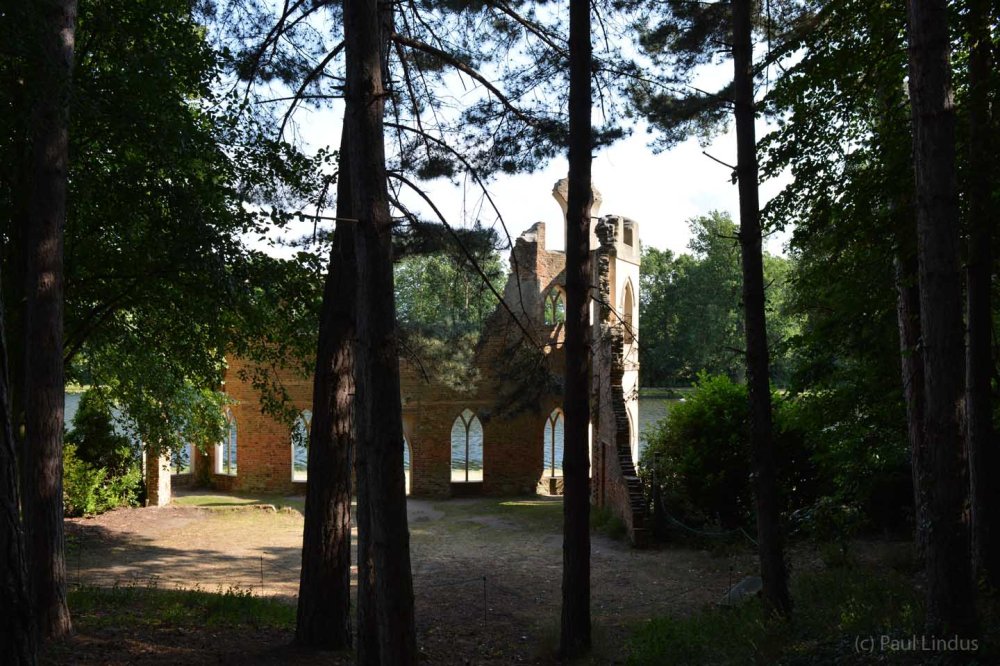 In a year of Capability Brown celebration, the extraordinary restored masterpiece at Painshill actually predates Brown’s work.  When its creator, the Hon. Charles Hamilton began work on his brainchild in 1738, twenty two year-old Brown was still working as a gardener on the Kirkharle estate in Northumberland. 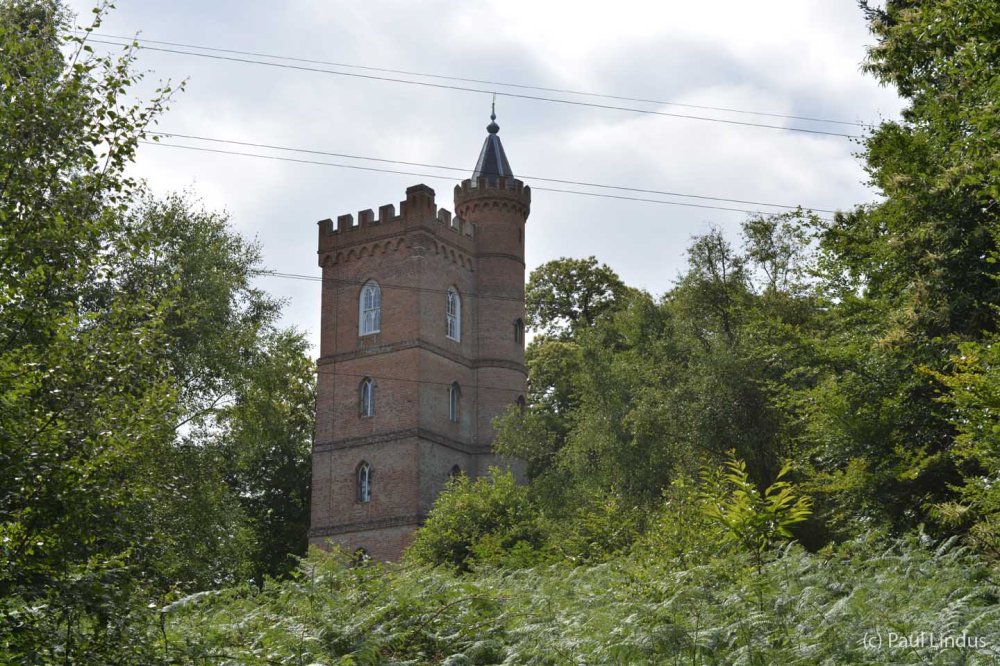 The two styles are similar – they’re both ‘landscapes’ – but they enjoy subtle differences. Brown remains King of the Vista, placing temples, obelisks and other eye-catchers at strategic places in the garden. Hamilton’s softer, more cerebral vision envelopes the visitor in an ‘experience’; a garden of moods, using different styles of folly – both architectural and horticultural – to evoke intense and varying emotional reactions at different points on the walk.

Not a wealthy man, Hamiliton’s life’s work took 35 years of pulling favours, saving pennies and doing jobs piecemeal. It has taken the Painshill Trust exactly the same amount of time to bring the park back to his vision, often using not dissimilar tactics. 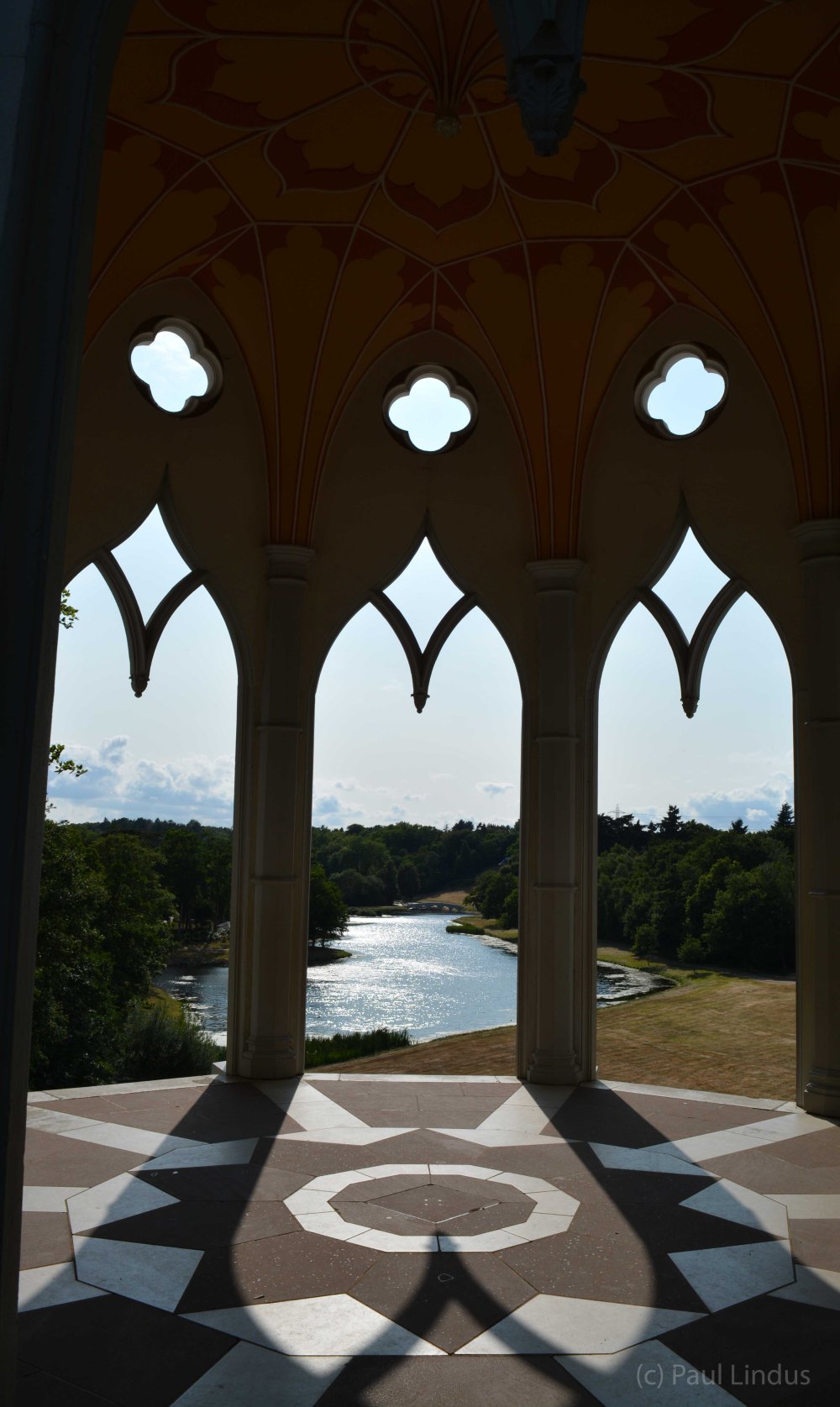 Plantsman rather than housebuilder, Hamiliton preferred to spend the little money he had (or had borrowed) on new specimens arriving from the East Coast of America. His relationship with American naturalist John Bartrum led to rich plantings of exotics – if, possibly, it also led to the park’s eventual sale when Hamilton’s friends started calling in their loans. The garden was sold in 1773, went through thirteen different owners and finally, after World War II, fell into decay. 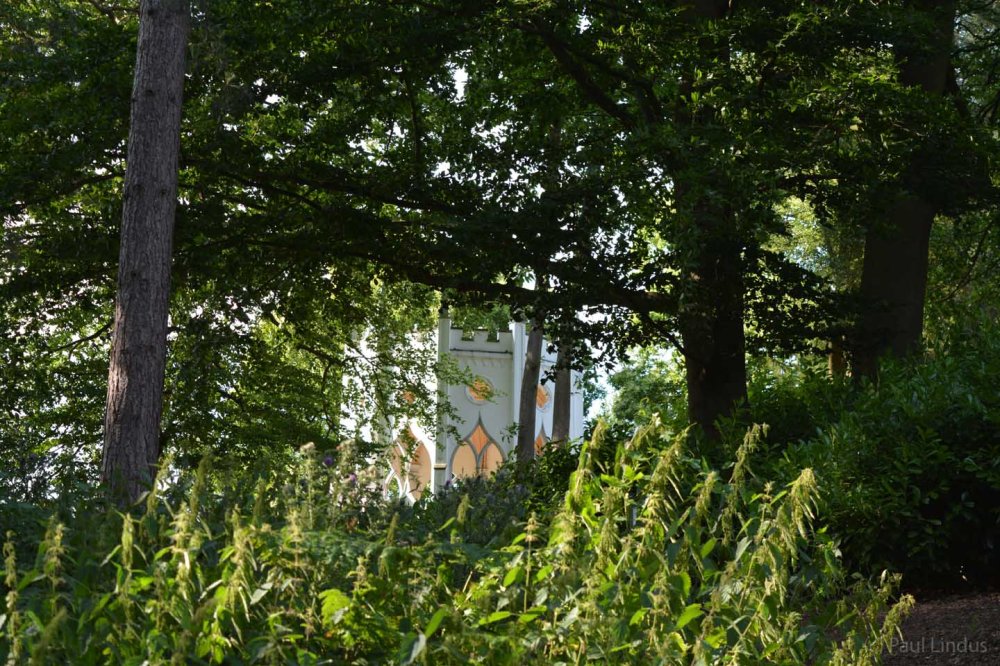 Then a seminal newspaper article about the lost garden by local historian David Taylor went the 1960s equivalent of viral, inspiring a group of people determined to rediscover Painshill. A small pressure group persuaded Elmbridge Council to buy as much of the land as possible and, in 1981, the Painshill Park Trust was granted a 99- year lease on the understanding the trust would restore it as close as possible to its 18th century splendour. 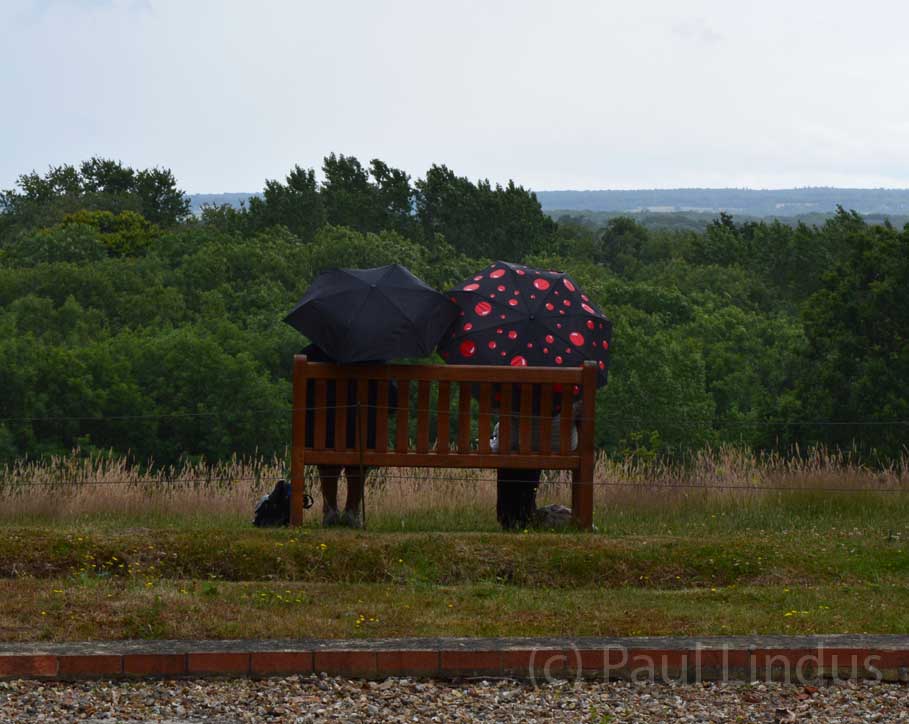 Oddly, the split in ownership and the garden’s eventual decline would prove to be its salvation. “It came very close to being developed,” says Painshill Park Trust’s chief executive, Michael Gove (no relation), “but even in its derelict form it was still Grade 1 Listed. So many owners meant people didn’t live there long enough to change it dramatically.” 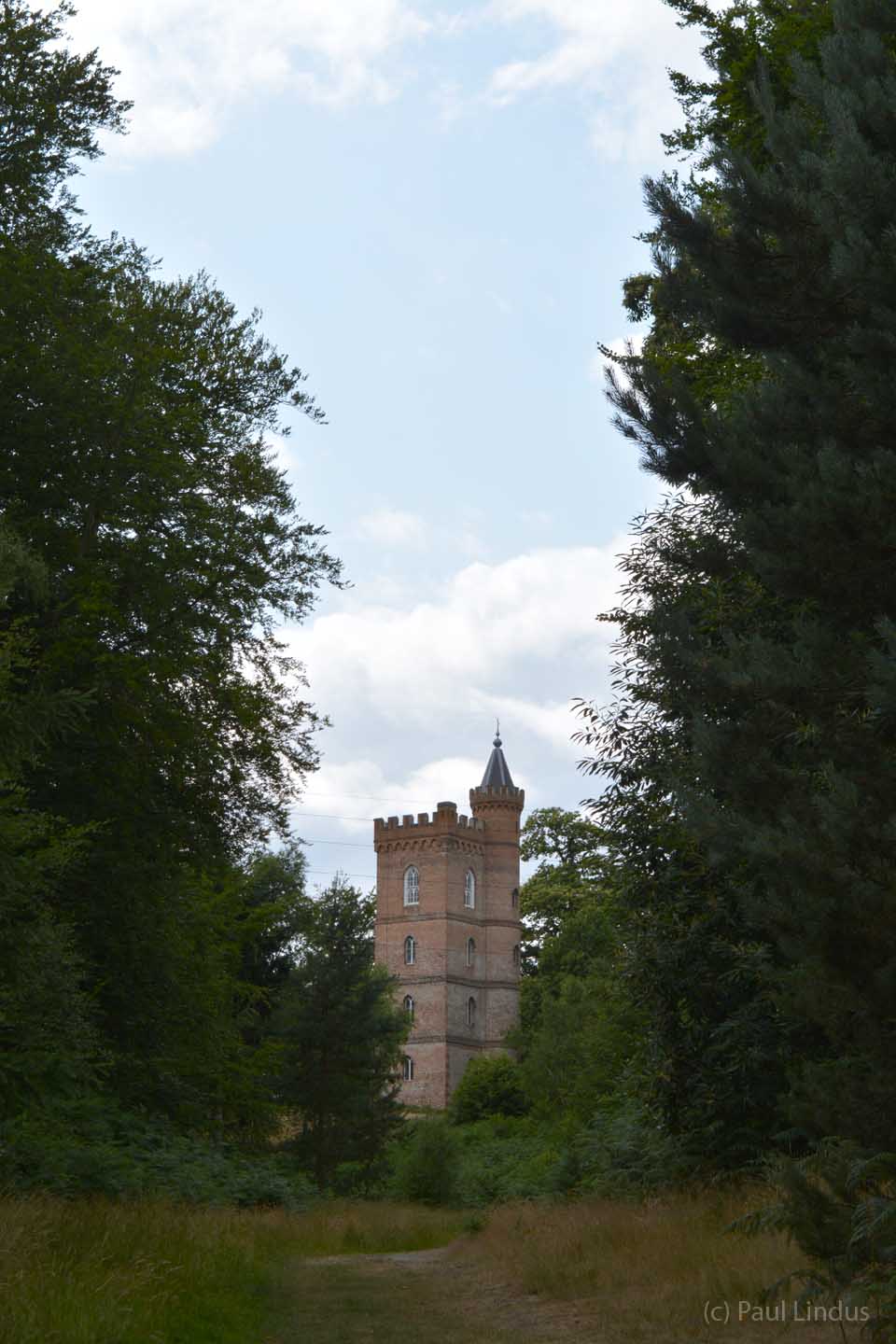 Gove has worked at Painshill for over twenty years, though his relationship with the park started merely as tenant of the garden’s most substantial folly, the Gothic Tower. Surrounded by workers revealing the sleeping garden on a daily basis, the former architect and project manager fell prey to its charms. “It’s like a spider’s web,” he says. “You can’t get out; you become emotionally involved”. 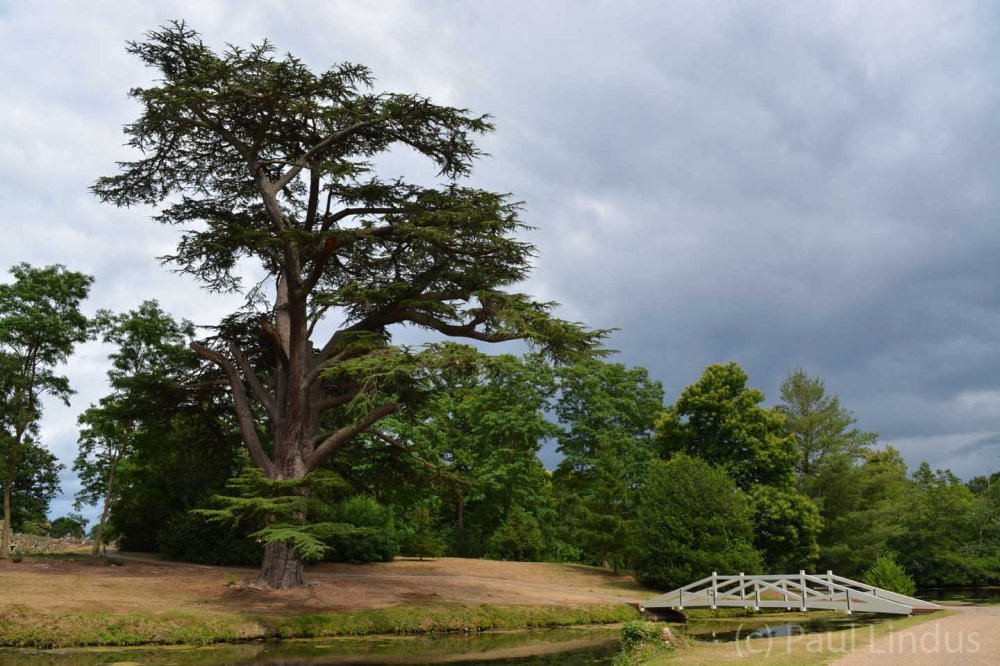 Charles Hamilton’s masterpiece was inspired by his travels on the Grand Tour most young English gentlemen took to complete their education. Grand travellers experienced the great palaces of the Netherlands, Germany and Switzerland before discovering the classical ruins, Palladian architecture and pastoral scenery of Italy. 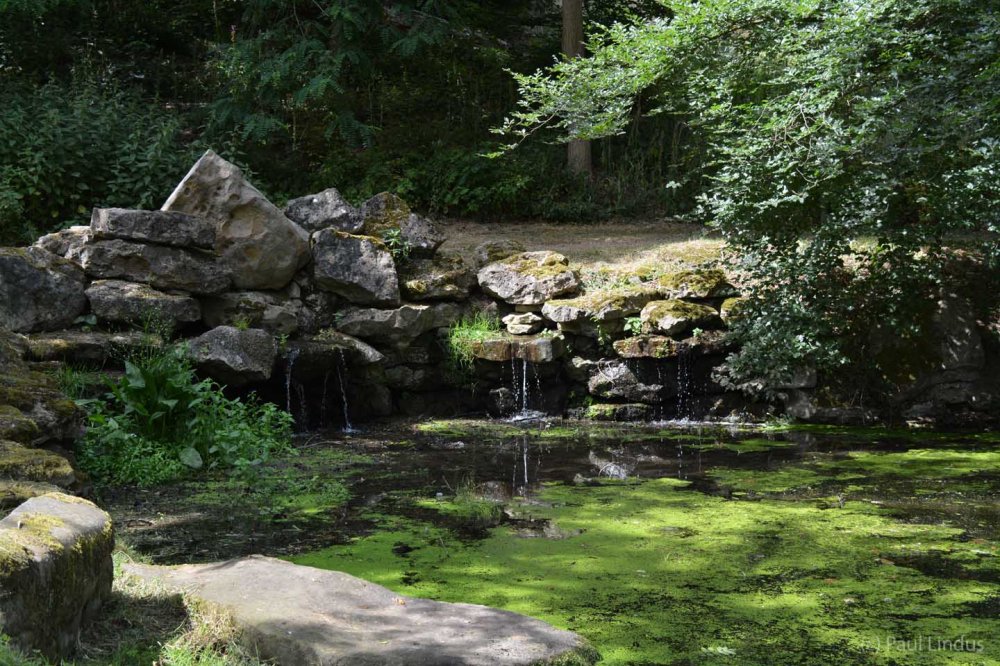 “When you walk around Painshill you are on Hamilton’s grand tour,” explains Michael Gove. “He controlled your emotions as you went, always with surprises”. Whether the serenity of the views up by the Hermitage (which came complete with a real ‘hermit’ until he was caught boozing in the local inn) experiencing the frivolity of the Gothic temple or descending into the depths of the ruined Mausoleum, Hamilton wanted his visitor to be profoundly affected by their surroundings. “Take the vineyard,” says Gove. “It looks as though it’s on a major river.” The ‘Rhineland paradise’ turns out to be an extension of the lake. Each new focal point marks a different emotion: the Chinese Bridge, the Ruined Abbey and, perhaps most beautiful of all, the Crystal Grotto. 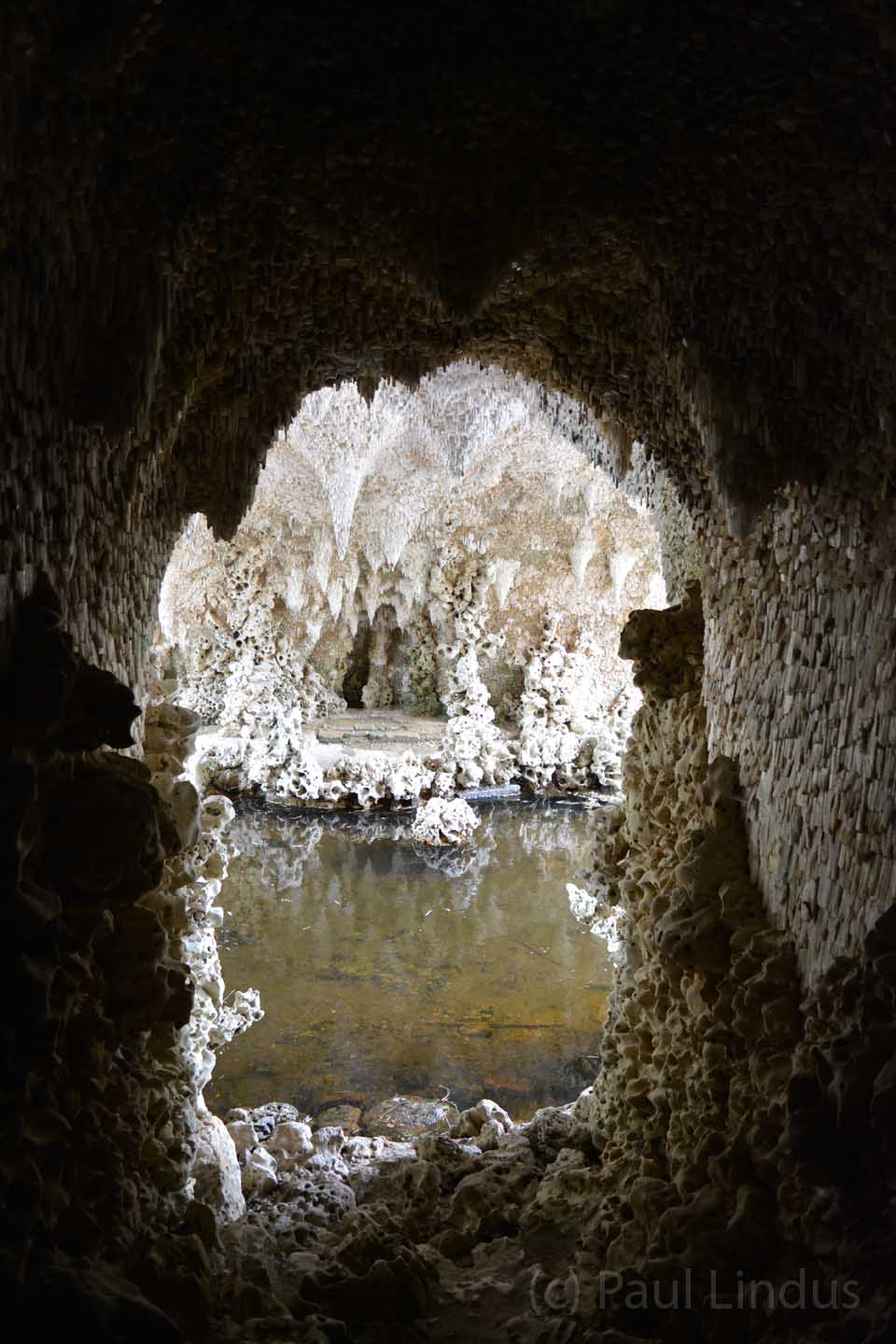 “Hamilton took many years to create his grotto, doing it in stages,” says Gove. “He was giving his grotto builder pieces of money to do a bit more when he could.” 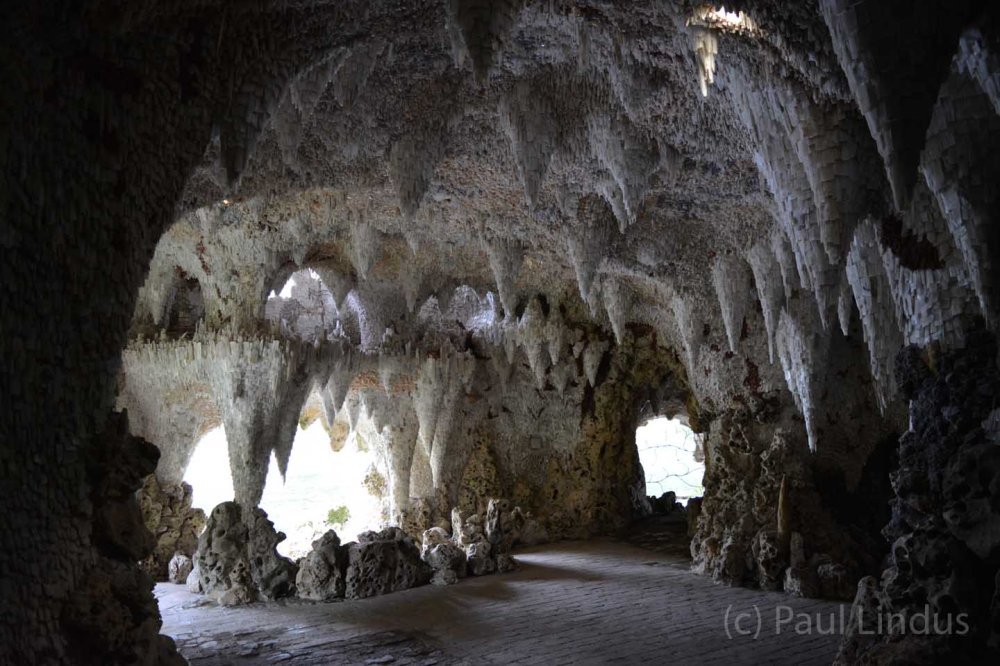 Grotto Island is formed of a small hill already there when the lake was flooded. Connected by a bridge, everything about it is intended to instil the two emotions Leonardo da Vinci said grottoes should inspire – fear and desire. Imported ‘sponge stone’ from the West Country brings an almost primeval, gothic feeling; oppressive, narrow entrances of black clinker open out into a sparkling fairyland of crystal, with cascades of water and views across the lake. Of course when the Trust arrived, Fairyland was roofless, after its lead had been removed post-WWII (locals whisper it was removed to fund a riotous VE Day party). “We carefully excavated the remains, and all the crystals we could retain were catalogued. Years of research followed, looking at 18th century watercolours, descriptions and photographs,” says Gove. Like Hamilton the Trust did small amounts until the Heritage Lottery Fund granted funds for restoration. Computer modelling and canvas mock-ups led to a year’s intense hand-bedding of hundreds of thousands of crystals: Gypsum, quartz and fluorite. Originally, an Archimedes Screw operated by unfortunate under-gardeners would have created the water fountains when guests arrived. Today’s lackey-friendly option is electric-powered. 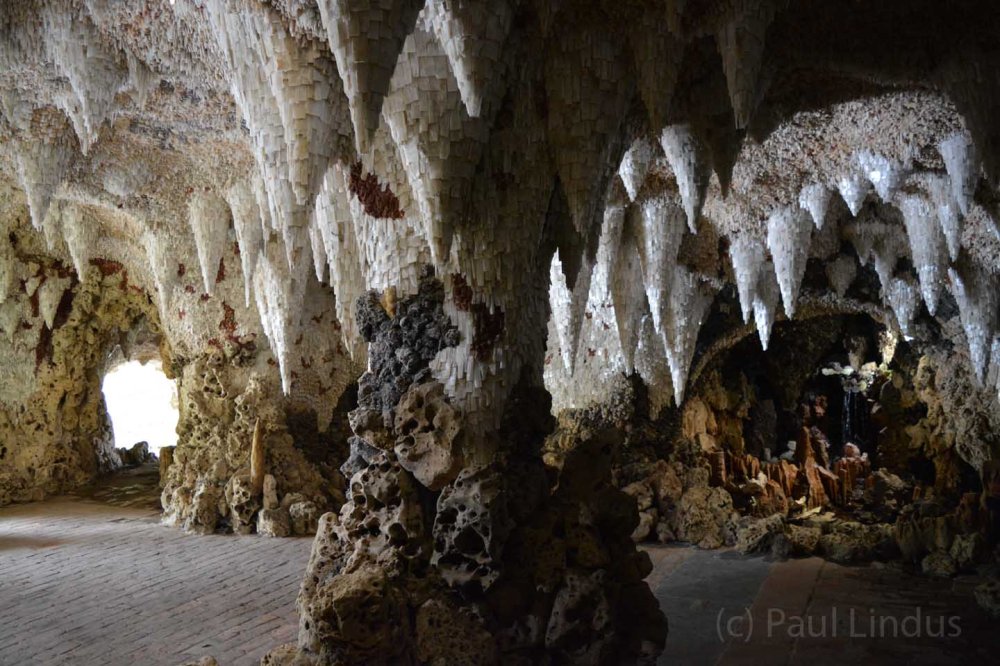 Some of the garden’s most affecting ‘follies’ are not bricks and mortar (or even crystals) but plantings. The Amphitheatre, a six-tiered arena of plants, trees and shrubs, contains many of Hamilton’s original exotics. The Alpine Valley is a direct reference to the Grand Tour, while the Elysian Plains showcase the kind of annuals and perennials Hamilton loved. Perhaps the most majestic vista of all is from the recreated Turkish Tent, which would have been the end of Hamilton’s tour – a fitting finale to this most theatrical of experiences, including a grand reprise of Painshill’s best set-pieces. 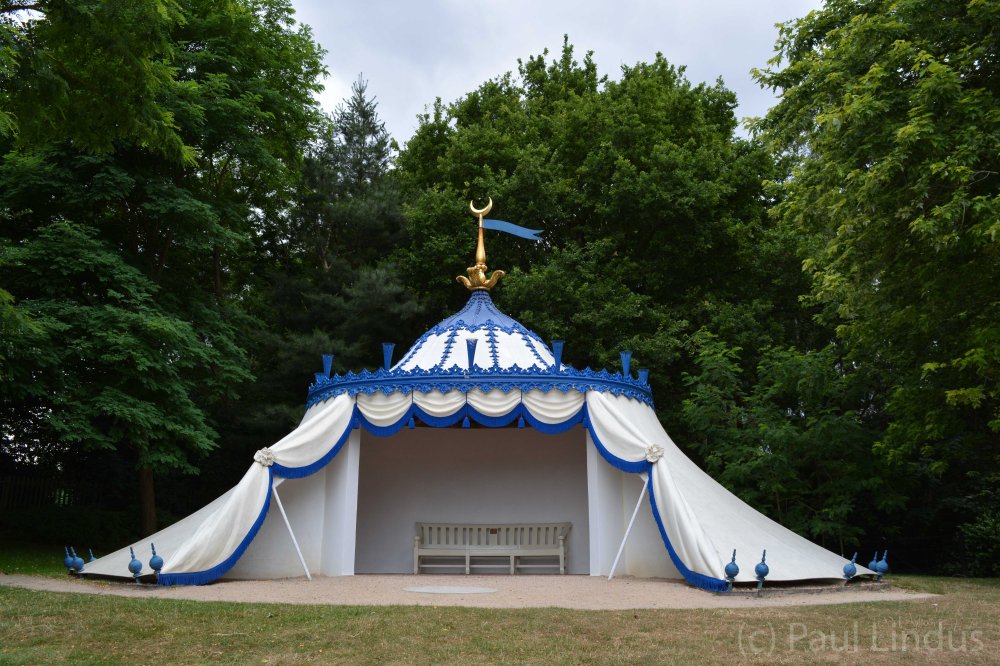 Whilst maintaining Painshill is the epitome of the garden for all seasons “there is something spectacular at any time” Michael Gove believes autumn is particularly special. “The 18th century was one of the first times people would have seen vibrant autumn colours,” he says. Imported American trees and shrubs brought a rainbow of reds and purples, oranges and yellows to the native British browns and golds, dotted with bright berries and dark evergreens. 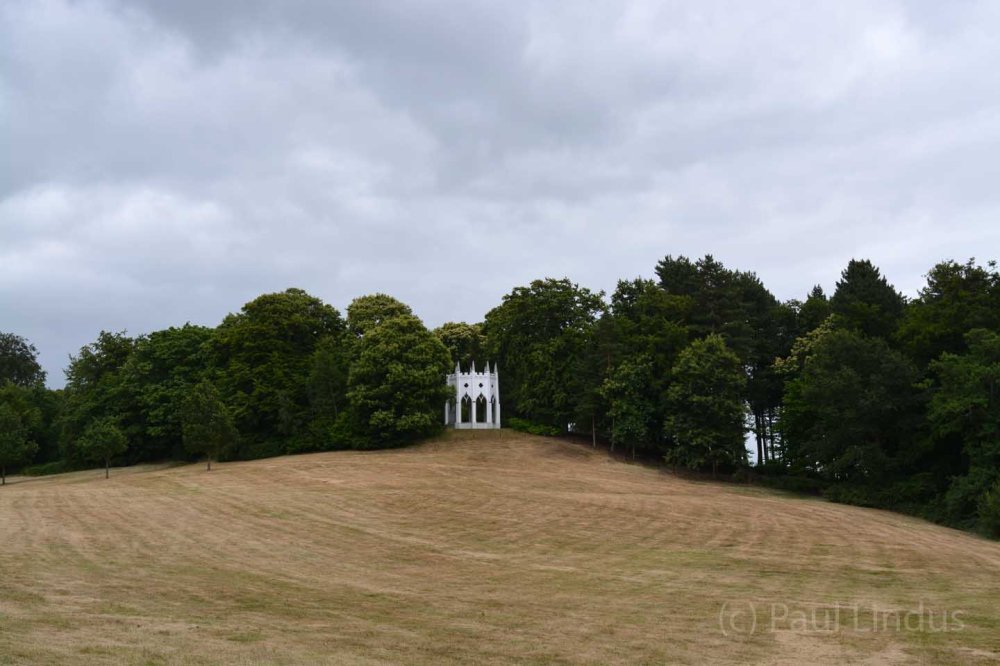 Perhaps the most arresting image of all is the reborn vineyard. In its day, Hamilton’s sparkling wine sold at the princely sum of ten shillings and sixpence a bottle and deceived a French ambassador into believing he was drinking Champagne. Restored in 1992/93, today’s vineyard is smaller than the original five acre site, but still packs a punch. Planted with Hamilton’s Pinot Noir plus Chardonnay and Seyval Blanc (a rare concession to contemporary cultivars) it mainly uses the modern trellis method, with three vines on each row demonstrating the old single-pole Burgundian style. 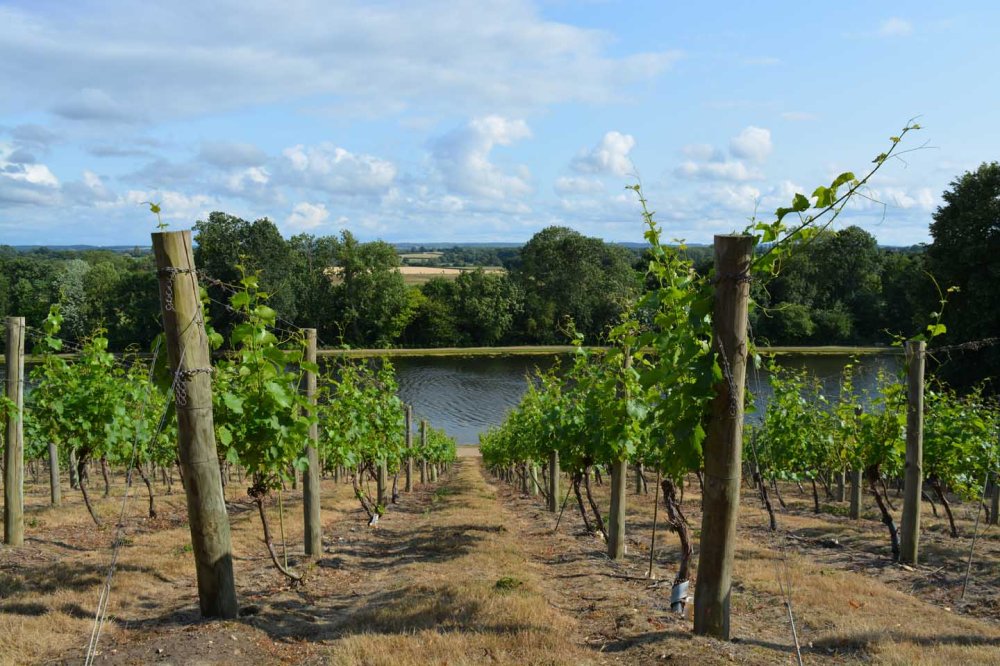 Every autumn an army of volunteers, stewards, gardeners, receptionists and staff hold a giant party to harvest the grapes. “Everyone dives in with their baskets,” says Michael Gove. From the first crop in 1998 the high-quality sparkling wine is sold only in the estate shop, eagerly awaited by loyal devotees. “It’s not a big money maker,” Gove admits, “but it’s a lovely way to keep the history of Painshill alive.” 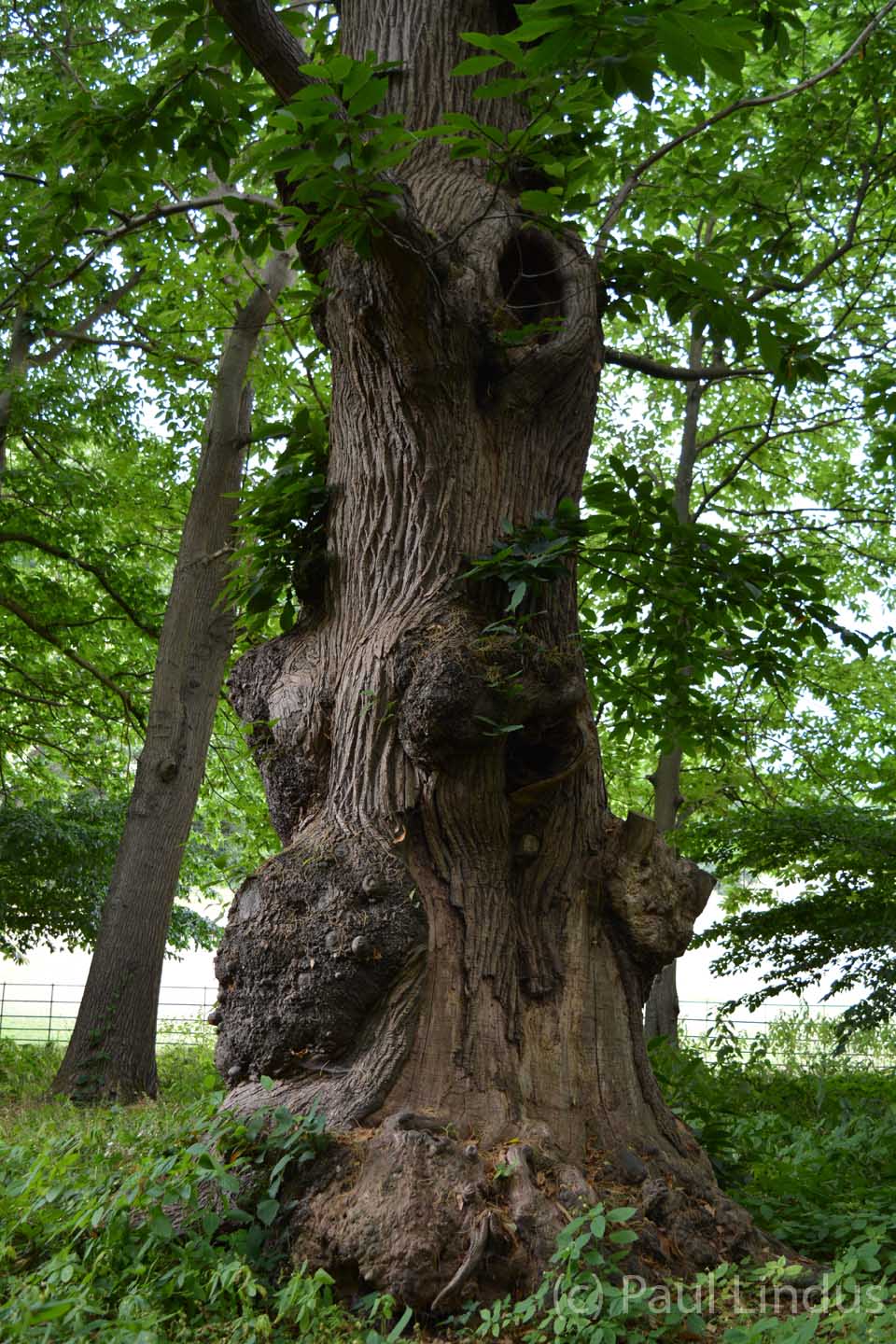 This feature, by Sandra Lawrence, originally appeared in The English Garden. If you would like to syndicate it or commission Sandra to write something similar, please contact her via her website.