1939. The world is on the brink. Mr Hitler hasn’t actually invaded anything yet, but it’s not looking good in Poland.

The men in grey suits are worried. How will old Blighty survive if the lads have to fight? They look at each other warily. There is one option. It’s not ideal; the chaps won’t like it. But this is war. The Whitehall mandarins quietly remobilise a division first formed during World War One. The Girls are back…

The Women’s Land Army was at first derided by farmers who became the loudest shouters after the war to keep the hard-working women who’d earned their respect (if not very much of their money.)

By 1943, 80,000 ‘Land girls’ worked on farms while 6,000 ‘Lumber Jills’ from the Women’s Timber Corps cut down trees and ran the sawmills keeping Britain battling. Often away from their families for the first time, these women epitomised coal-face feminism. From milking cows to catching rats they did a man’s job, and they did it well. They were able to send (a little) money home and they enjoyed a hitherto unknown freedom and camaraderie. Some even had a proper wardrobe for the first time – and that uniform lives on in our collective image of WWII.

First World War Women’s Land Army uniforms had been revolutionary.  These pioneers were the first proper trouser-wearers, first short-hairers and the first heavy-coaters, but Society had found it hard to deal with women out of frills, flounces, corsets and long dresses. By 1939 the world had moved on, though and practicality fanned feminism.

Garments needed to use the least amount of cloth, get the most amount of wear and the most amount of work from the girls sporting it. It was a tough life with long hours (officially 50 a week, but much longer at harvest time) and back-breaking, filthy work. The clothes had to keep up. They needed to be warm, weatherproof, durable and at least sort-of fit.

The uniform allowance was generous (see below) but, since the WLA wasn’t a military force, not compulsory to wear.

I am convinced the photos we see of nicely turned-out ladies in clean breeches, smart shirts and ties with neat hats and pins were mainly dress-uniform for propaganda. No, they’d have worn a combination of old blouses, men’s shirts, moth-eaten woollies and whatever else they could find. I understand shorts were popular in the summer. On their heads, women wore scarves, turbans, snoods – anything to keep their hair out of the way (and hide those curlers for the dance that evening.)

As a keen allotmenteer I found myself pondering what it would be like to actually garden in the same clothing the land girls would have known. Admittedly, digging a few spuds and hauling a car boot’s worth of manure up a hill isn’t quite the acres of fields the feisty forties girls would have furrowed, planted and reaped, day in, day out, in all weathers but I figured the only way to get an insight into how it must have been for them was to do a little more than just dress up.

I planned to buy my clothes from online company Apple Tree Lane who do a range of repro women’s’ work wear – from Women’s Land Army to Lumber Jills, WAFS to the Royal Voluntary Service. Look to them for authentic arm bands, patches, dungarees and enamel badges (sadly discontinued in 1942 due to metal shortages). In the end, though, I decided if I really wanted to do this, I should at least make sure my most recognisable bit of kit was real. I found an original pair of breeches on ebay. 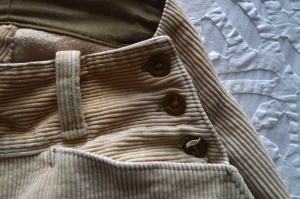 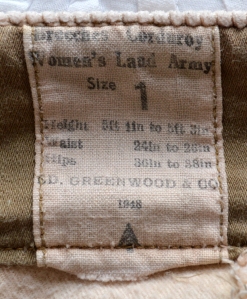 I was surprised at how light their colour was – pale cream; I was expecting a much richer tan. Perhaps they’ve faded with age and washing, but if they have, it’s a very even fade. They have worn astonishingly well, with just slight pilling inside.

An intriguing garment, they’re flattering and yet not. As a modern girl who grew up with lycra the lack of stretch meant getting used to a distinct bagginess around the backside, and tightness round the knees.

The waist is high, even higher at the back, designed so that when you bend over your shirt stays tucked in. The resemblance to jodhpurs is obvious, but the thick cord is warm and the pockets deep. They button up each side, and the crotch is reinforced with tape for durability.

The strangest thing I found whilst working in them was the knees, which are laced to keep them tight. In every photograph I have ever seen, the breeches are tucked in the girls’ socks. As I knelt, however, the ties I assumed should be at the side, worked their way around to the front and the resulting ‘twist’ made me look rather bandy-legged. On the plus-side, the laces worked as kneepads which meant it was sometimes better to work with the laces outside my socks.

Being lazy myself, I find it hard to believe Land Girls would have been fully made up all the time, especially given the lack of supplies. But these were different times.

Women needed something to cling onto; a little glamour in an otherwise grey-green-brown world. If romance came from a dab of Ponds or a stick of prized orange lippy, so be it. As the old Tangee make up advert said:  “No lipstick – ours or anyone else’s – will win the war. But it symbolises one of the reasons why we are fighting.”

All hail to the ladies in corduroy and gumboots. May your lipstick be forever orange, your seams ever straight and your Victories always rolled…