Okay, I went away. I went to the West Country for FOUR DAYS. When I got back, my lovely box hedges had turned from this:

had turned into this: 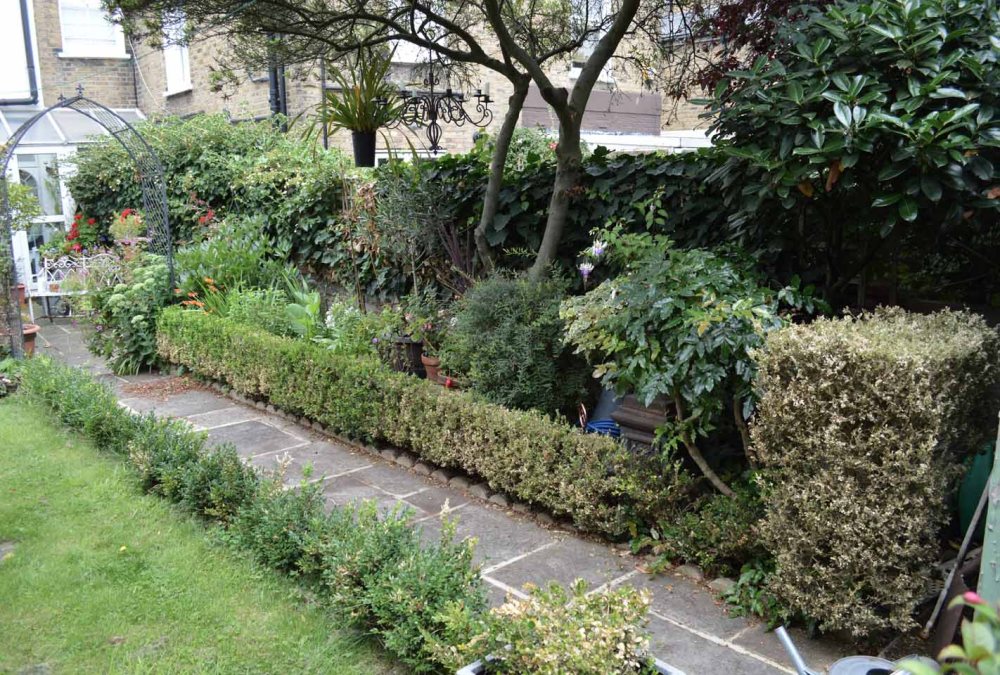 Just look at these two:

At first I thought it was blight but then I recognised the nasty, lacy, cobwebby skeletons that were once leaves and realised it was Box Tree Caterpillar. It’s not been around long – apparently it’s from East Asia and has only been chomping gardens over here since 2011 – started in West London, now, it would seem, it’s reached Greenwich. 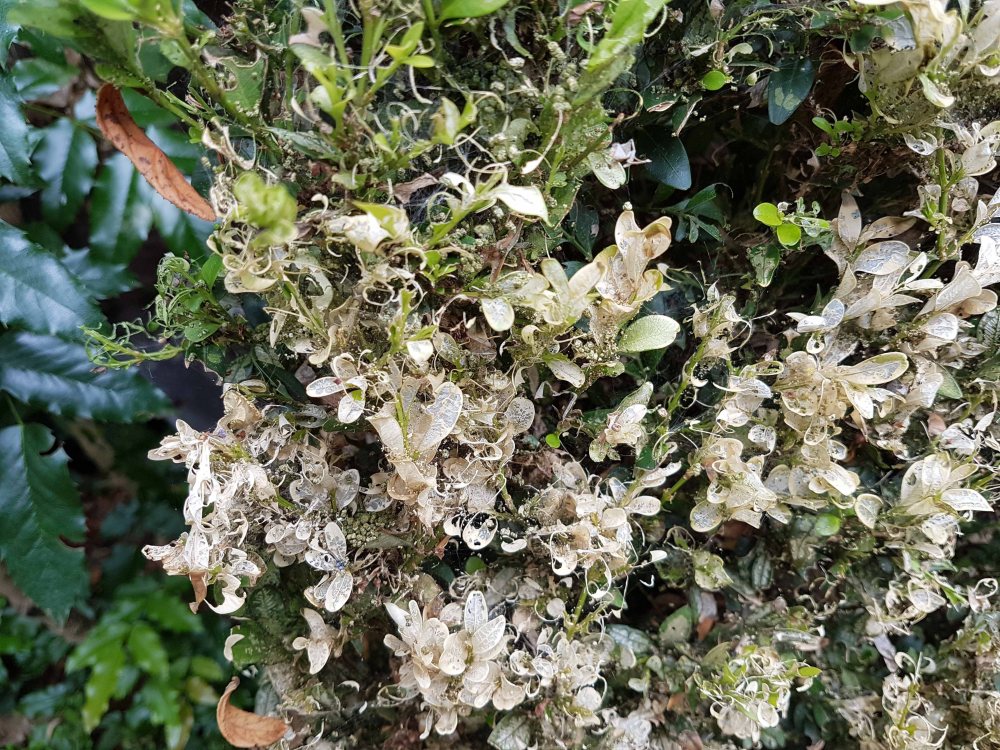 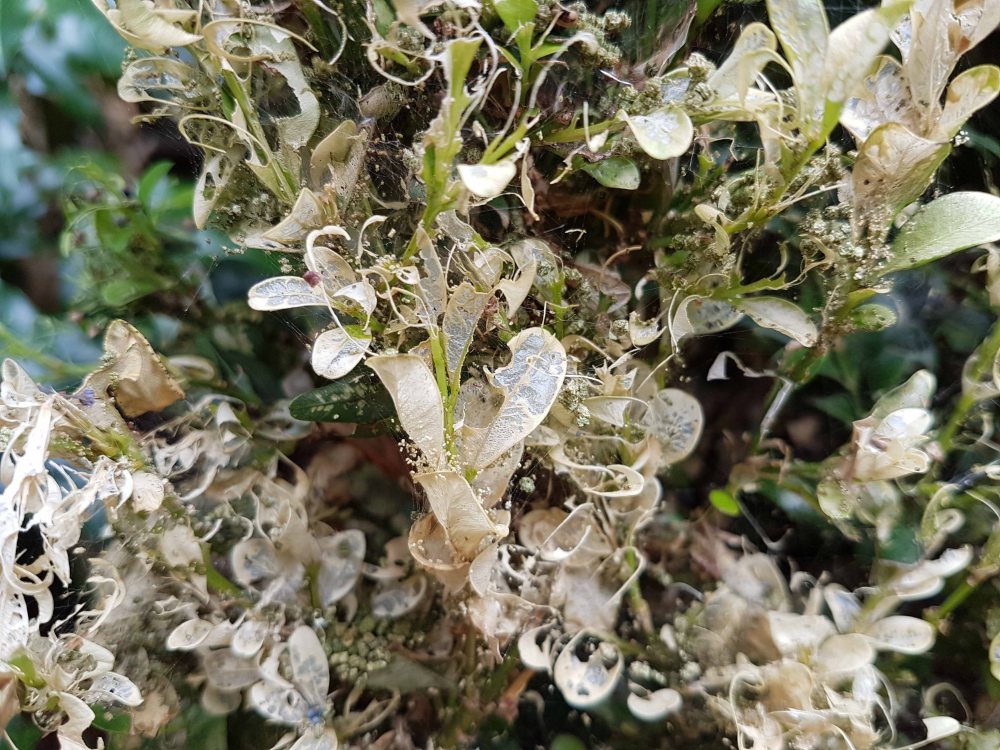 They’re the caterpillars of a moth, and can, according to the RHS, grow up to four centimetres in length. The longest I’ve come across so far have been about three cm, but the sheer number of them is ridiculous.

Here’s one of the culprits: 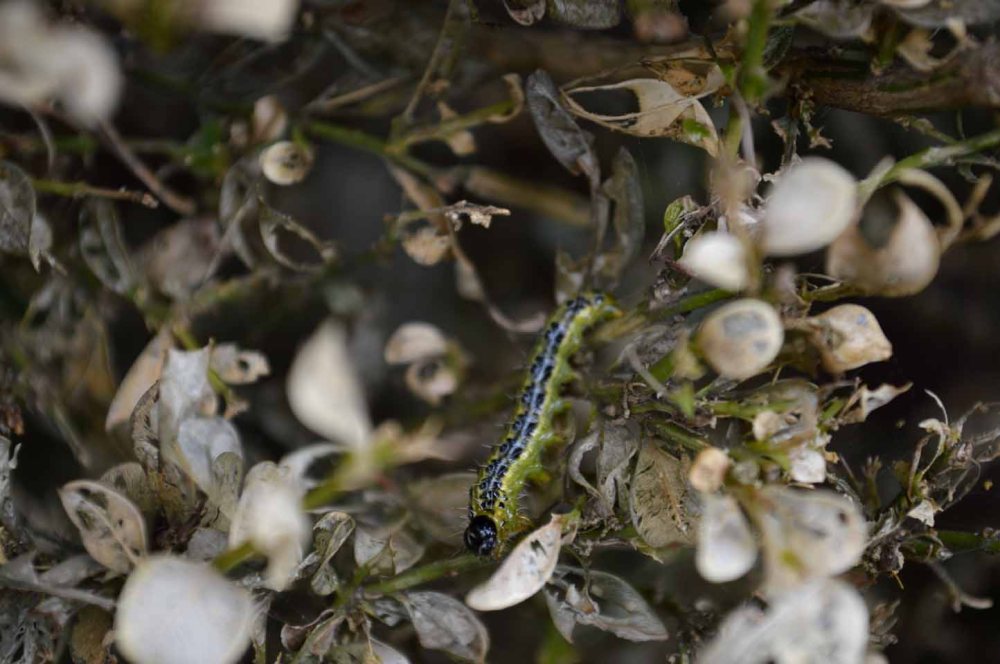 Now, come on. Look me in the eye and tell me not to panic.

Yeah, I thought not…

I started down the organic route, picking off the little buggers one by one and treating them to the underside of my boot. You can’t feed them to birds as poison levels in box leaves are bad for birds. Given the amount of bloomin’ box leaves these little blighters have consumed they must be very poisonous indeed.

I then ‘combed’ the plants with a coarse rake to get rid of the dead leaves, pupae and – euuuurgh – droppings and disposed of the lot.

I tried. I really did. But now it’s got ridiculous. If I leave it any longer I won’t have any hedge left. It’s time to declare chemical warfare.

The RHS supplies a list of effective active ingredients. I bought a pressure sprayer. Ta-da! 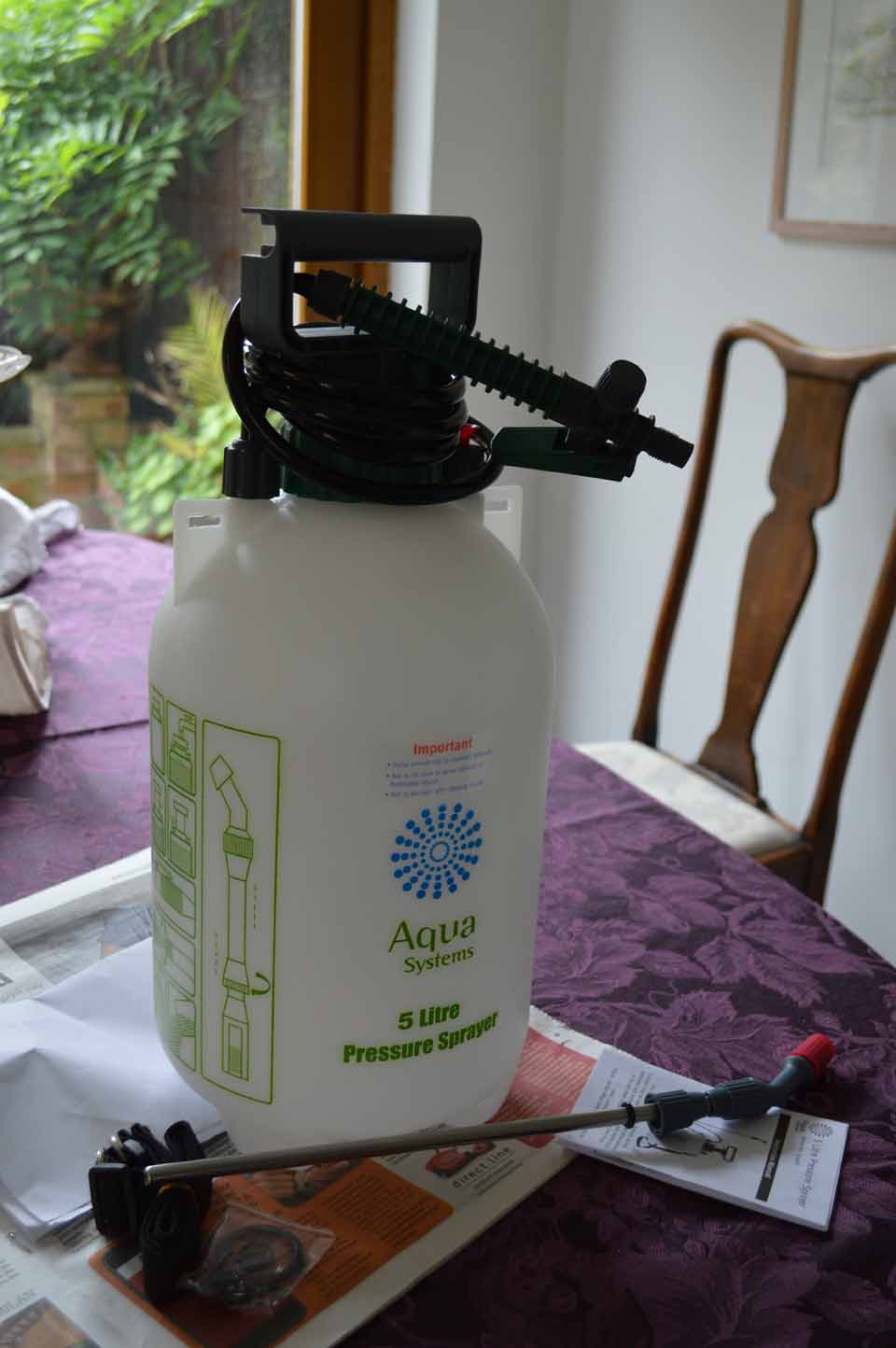 Then I got the nastiest, least-environmentally-friendly bug killer Homebase in Kidbrooke (who have the best staff on earth) could sell me. I had to peer at a lot of minute ‘active ingredients’ lists to find one that was on the RHS list but eventually ended up with (deep Hollywood-disaster-movie voice): 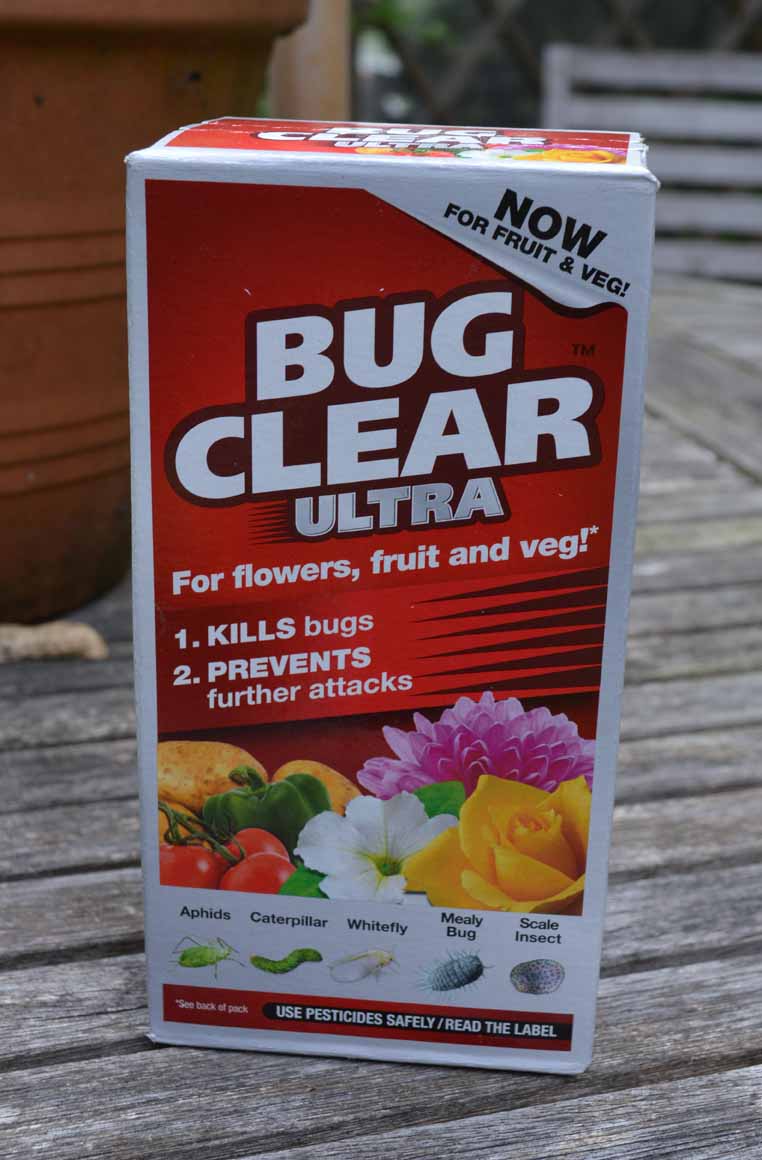 I wasn’t wild about the method – you have to spray it on wet foliage. I’m telling you now, the idea of watering box hedges goes against everything I have ever considered. If the caterpillars don’t get it, the blight will.

But hey. The deed is done. I’ve drenched every box plant I own, first with water, then with Bug Clear Ultra. Now I just have to wait to see whether it will green up again.  I’d like it to look like this – the view from my office window just a month ago: 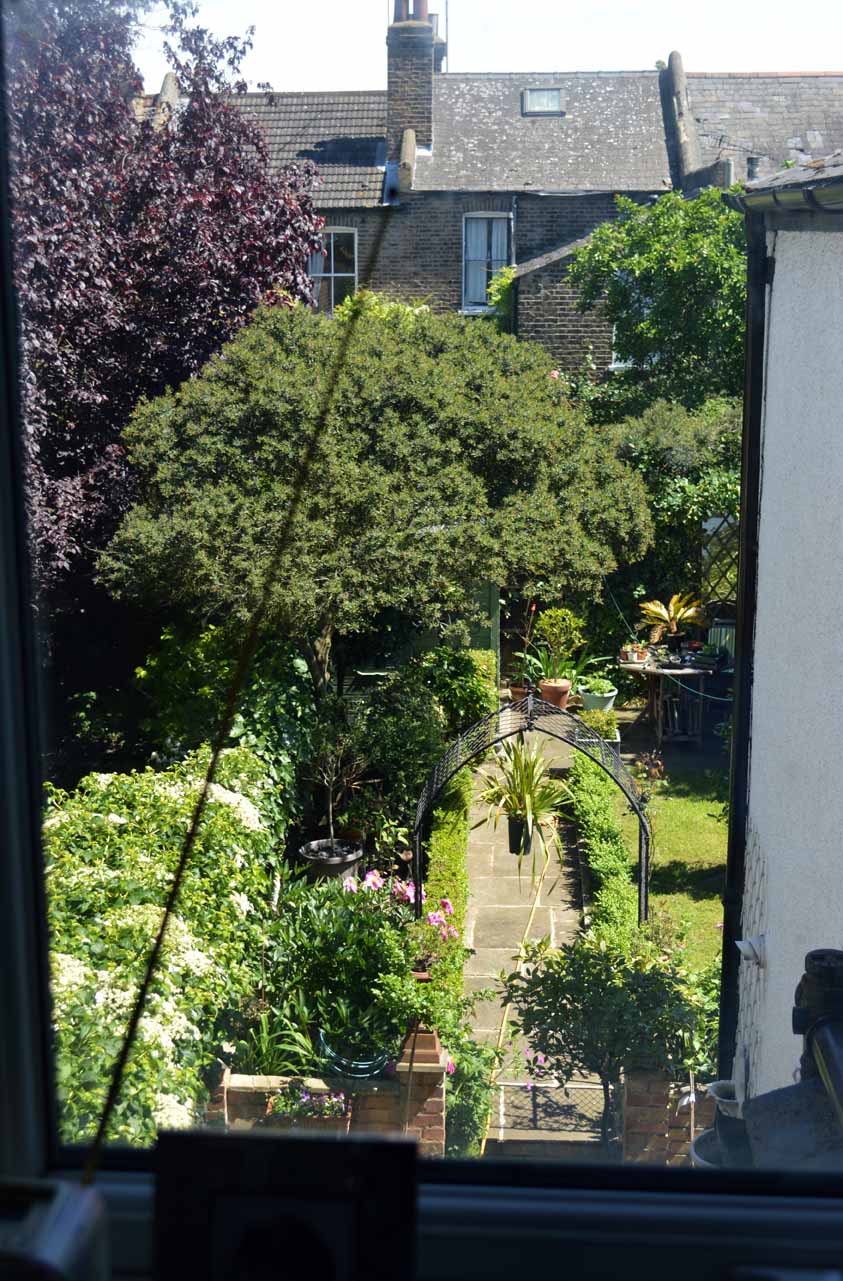 I’m not proud of my methods, but you know what, I’ll live with the guilt. I’m taking care not to spray flowers and thus affect other insects – as far as I can tell the only things it’s going to kill are caterpillars that have no geographical reason to be here in the first place – the pest was almost certainly brought in on infected plants – no other insects/birds seem to like box.

I did discover one thing. I LOVE playing with pressure sprays. I’ve flushed this one out now and am going to use it for slightly more environmentally friendly foliar feeds. One gets one’s fun where one can.

I’ll keep you updated. It’s taken 14 years to get one hedge to where I want it, and the other, smaller hedge is three-years-going-on-forever old. I really, really, really don’t want to lose them.

For now, though, I’ll live with the memories of a long-distant May 2017 when my box hedge was green as green. 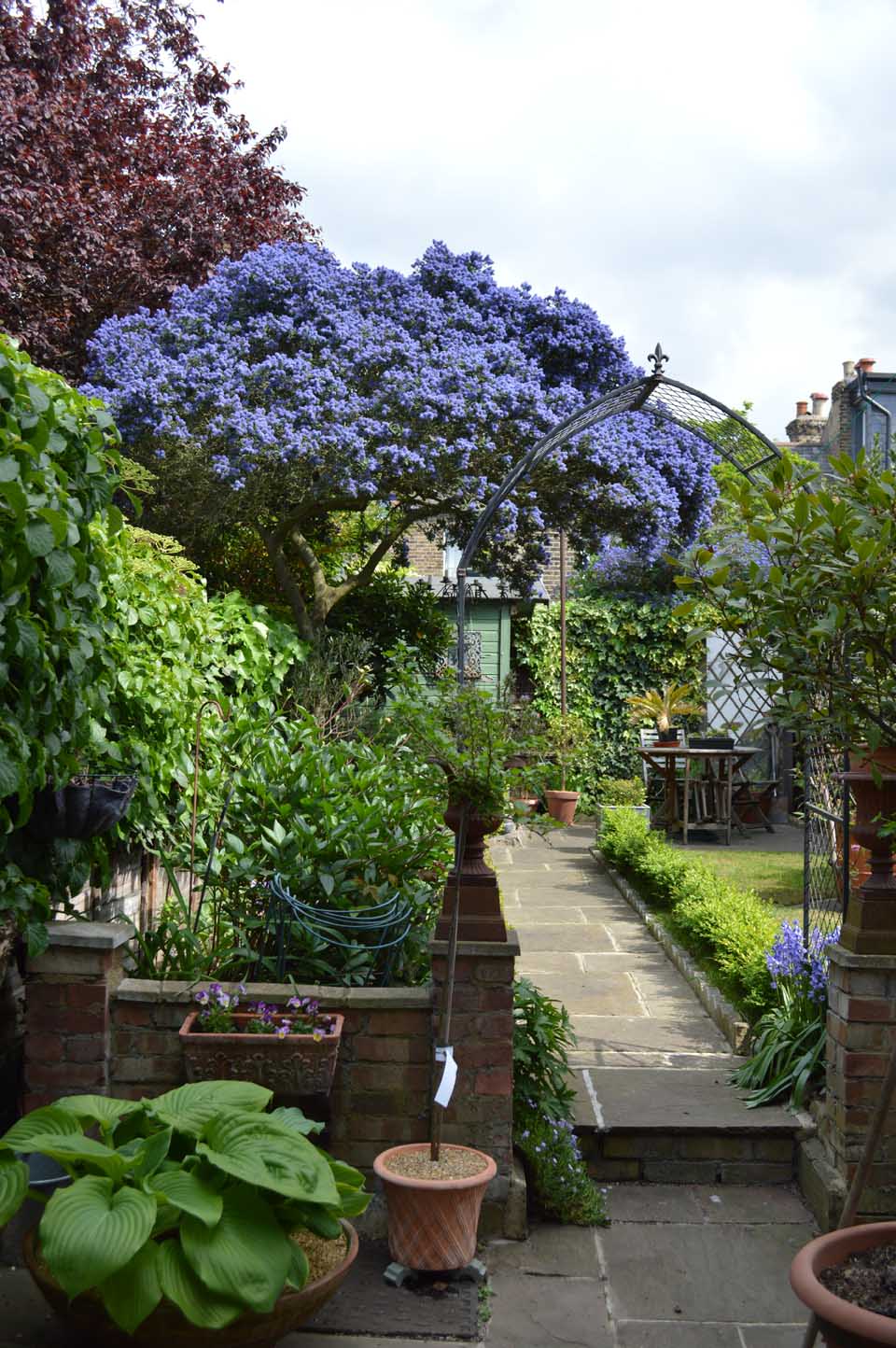