Jack sowed seven magic beans but only got one beanstalk. That’s a terrible germination rate.

Of course his mother did merely toss them out of the window after he swapped them for Daisy the cow but just imagine the enchanted kingdoms he might have discovered had he done it properly, with seed trays, potting compost and a little attention to detail.

It all goes to prove that, just as you should never ask Widow Twanky for fashion styling or take financial advice from the Broker’s men; don’t rely on pantomime characters for gardening tips.

Take Sleeping Beauty’s prince. Overgrown hedges can be a serious problem for a gardener but simply hacking away at them with a sword is an extremely poor way to prune.

Secateurs are a better choice for briars and cutting them down to a bud near the ground at the right time of year would have produced superior blooms the following season.

Quite apart from his choice of equipment, the prince also fails to wear safety goggles and his idea of protective clothing appears to be tights and a cape.

The Beast has better horticultural form, though even he falls down in the presentation department. Wrapping the specimen in damp tissue paper inside a plastic bag would ensure the rose he gives Beauty’s father survives the journey in better condition, thus avoiding the traditional race to save his life with a kiss. 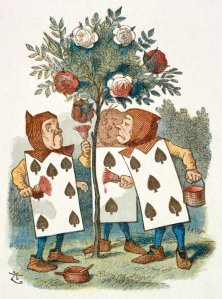 Some gardening problems can be avoided merely by paying attention to stock. A cursory glance at the label before planting white roses in the Queen of Heart’s garden would have saved the playing cards a serious paint-job later, not to mention a good many heads.

Similarly, if Snow White had troubled to bone up on heritage varieties, she wouldn’t have fallen for ye olde ‘poisoned-apple’ wheeze. The potential princess chose a bright red bauble – presumably a supermarket special covered in dodgy chemicals to keep it shiny when, if she’d just picked one of the more unusual varieties – ugly but tasty – she’d never have bought the Wicked Stepmother’s free-apples-for-pretty-ladies routine.

Old Mother Hubbard could give her a few tips – Hubbard’s Pearmain is not a looker but has absolutely stunning flavour and keeps well, though obviously not in some cupboards. Mine will be arriving from Keepers Nursery any day now and I can hardly contain my excitement.

Being fussy yields results. By refusing the mealy, ‘medieval peasant’ varieties of dried pea, suitable only for pottage, the girl who turns up at the castle door on a stormy night can prove she’s a Real Princess. Only tender, post-18th Century garden peas were good enough for Queen Anne and therefore good enough for mystery princesses.

Cinderella’s Fairy Godmother also had the right idea. Although clearly not growing pumpkins for flavour, she did have Cinderella’s long-term future in mind. If she’d just gone for the biggest squash she could lay her hands on, a road vehicle would have been the best thing for it. Woody and tough, it wouldn’t even have been worth carving for Halloween afterwards. Bigger is rarely better, as James will testify. Giant peaches can give you all manner of gyp.

By choosing French heirloom Rouge Vif D’Temps, also known as the Cinderella pumpkin, Fairy Godmother grew a deep orange, ribbed squash that would not only provide a stylish mode of transport, but would provide a tasty snack when the spell wore off after midnight.

She could have also chosen the charming and virtually ever-after-lasting Crown Prince or another old French variety, Musque de Provence, AKA Fairytale, 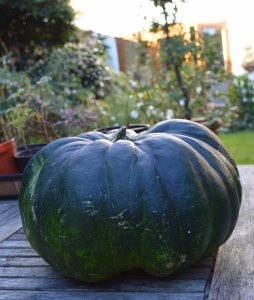 with its wonderfully segmented, burnished skin and nutty flavour.

It’s also great for pies, something nursery rhyme characters rarely get right. Blackbirds, thumbs; instead of going round the mulberry bush, turning bog-standard soft fruit into a tasty pud makes for happy endings instead of the traditional festive trip to A&E.

Happy Christmas, One and All!