I have no idea how anyone grows enough peas to be able to take them home. My allotment neighbour, Les, even has enough to freeze but me – well although I’d never be without my pea patch, frankly they never make it off the plot… 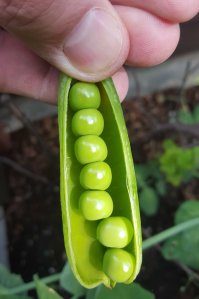 This year I’m using up the last of my Ambassador seeds. I bought them last year, mistaking them for Alderman climbing peas and was very disappointed they didn’t grow above a couple of feet high. But the flavour was good and they cropped as well as any peas on the plot, so I sowed the rest in a bed I’d intended for sweetcorn.

They took rather longer to swell than I expected (probably the godawful weather we’ve been having) which mean the sweetcorn had to go elsewhere, but they’ve cropped decently and they’re a sheer joy to pick individually and scoff then and there.

Fat pods contain between seven and nine juicy peas, with a lovely sweet, nutty flavour. I probably won’t buy them again – they weren’t totally knockout and I want to experiment with other varieties, but this tiny little crop has been, despite its non-climbing nature, a true event. Roll on a few weeks when I’ll be testing the double-podded Jaguar.