Last year I tested – and approved of – three French strawberries. Each scored highly in the flavour stakes but for different reasons.

My plot just isn’t big enough to grow lots of different strawberries, so I’m not planning any new trials of standard strawbs but I am intrigued by the concept of a new ‘climbing’ strawberry, Skyline.

Of course strawberries don’t climb, or at least not properly. They don’t have tendrils, suckers or even the kind of clinging habit that makes them stick to things. What they DO have, though, are long stems which, on a normal plot, can be a bloomin’ pain in the butt. Here, however, they have been trained to grow as long as possible, with, as the manufacturer claims, ‘cascades’ of fruit.

The idea is that you grow them under netting, trellis or inside a ‘climber tower’ and tie them in to the supports so they grow vertically.

The advantages are obvious: space saving, they use a fraction of the ground area of normal strawberries. They stay off the ground, making it harder for slugs to attack and soil-splash, though I’m guessing they’ll probably still need netting from birds.

I’ve been sent five plants to test. They’re going at either end of the ‘Horse Trough’ at the back end of my plot. It’s not a real horse trough, of course, but a long, thin raised bed made from old paving slabs, roof beams and estate agent signs created last year to try to blot out a particularly ugly glory-hole on next door’s plot. It mainly houses runner beans but has reclaimed trellis at each end. Last year it hosted cucumbers that ended up going feral – just two plants fed the entire street.

It doesn’t get the sun ’til midday, and, when the beans grow up, it will be partially dappled light, but the raised bed will be warm and sheltered.

I’m certainly interested to know how Skyline performs. It looks as though it should grow easily enough, and tying-in should be no tougher than, say, sweet peas. But… how does it taste? Does novelty sacrifice flavour?

There’s only one way to find out. 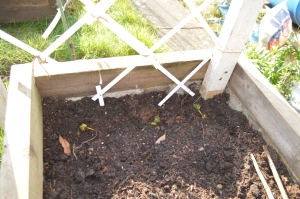 Sadly I’ve been having the darndest time with these poor little plants. They were always weak and two didn’t survive the first week of planting. Of the other three one was eaten by slugs and the other two put out panic-flowers, which I removed so the plants could concentrate on growing. They have struggled and struggled, and so far I suspect I’ll be lucky if any of them survive at all.

I really don’t know what I was doing wrong. They had rich, well-drained soil and my other strawberries (Gariguette, Mara de Bois and Manille) are all strong, healthy plants – even the runners I took last year. I have had excellent crops from them all and they have all had the same treatment.

I’ll keep nursing these little guys, but at the moment, the prognosis is poor.