“I don’t like the word ‘secret’,” says Roger Connah, chairman of the Plantation Garden Preservation Trust. “It implies it’s private. Henry Trevor wanted the public to enjoy it.”

Public or not, the secluded Victorian paradise just outside Norwich’s inner ring road and left to sleep under a blanket of ivy for much of the 20th Century, is still pretty hard to find. In the shadow of a Roman Catholic cathedral actually younger than the garden itself, it’s easy to pass straight by two narrow gateposts marking the entrance. “People living a quarter of a mile away still tell us they’d never heard of it,” says volunteer Rosamund Inglis.

This was not the case in 1988 however, as the world ogled images of an upended double decker bus wedged down a hole in Earlham Road. The collapsed tunnel was part of an old mine, source of materials for Norwich’s famous flint-faced architecture. The garden, just a few feet from the accident, nestled in the mine’s former chalk pit away from the casual eye.

Henry Trevor hadn’t intended it that way. A furniture and furnishings tycoon, he was also a devout Non-Conformist, family man and charitable patron. He was aware many people living in the local terraced cottages had little or no green space of their own and the only immediate ‘amenity’ was the City Gaol. The idiosyncratic garden he created in 1855 was ostensibly for his family, but also, from the start, loaned out for public concerts, fetes, functions and flower shows.

After Trevor’s death the house and garden were leased to a succession of tenants, somewhere along the line becoming separated. The house took turns as a private nursing home, midwives’ hostel and family planning clinic. The garden was first neglected then overgrown then, eventually, good as lost.

The Plantation Garden Preservation Trust was founded 36 years ago by formidable but dedicated Bryony Nierop-Reading after witnessing Sir Roy Strong’s seminal exhibition The Garden at the Victoria and Albert Museum in 1979. Many hundreds of hours of ivy-clearing, stone-digging and terrace-clearing later a landscape emerged that Henry Trevor might have stood a halfway decent chance of recognising. “You can’t achieve this without a huge amount of effort,” notes Roger Connah of Nierop-Reading’s band of volunteers. “They had no cash.”

At first-sight, Plantation Garden looks today much like a Mid Victorian municipal park – formal beds of annuals, a palm house with exotics and an Italianate Terrace full of graceful urns tumbling with scarlet pelargoniums. Closer inspection, however, reveals an altogether funkier Henry Trevor. For a wealthy man who made his name at the Great Exhibition of 1851, one might expect him to have placed a few orders for garden statuary and hard landscaping from the sumptuously illustrated catalogues the event produced. Lord knows there were enough mass-produced ornamental fountains, balustrades and urns at the show to fill any normal millionaire’s little Eden. Henry Trevor’s drum, however, beat to a different rhythm.

He appears to have gone round local builders’ yards collecting misshapes, rejects and broken pieces of fancy architectural salvage, turning them into his own extraordinary stonework collage. A bog-standard ‘Gothic fountain’ spotted from a distance turns out to be a riot of magpied knick-knacks, few of which appear to have ever been complete. Some carved trefoil here, a few odd dogs’ faces there, each with something knocked off or missing.

A bunch of random bits of tile and a stone head disturbingly like Boris Karloff’s Frankenstein’s monster adorn Trevor’s mosaic ‘medieval wall’, while the zig-zag Italian terrace is fashioned from reclaimed flint, individual plinths and what looks suspiciously like a set of fake gothic church windows.

A visitor could be forgiven for assuming the melange is the work of the project volunteers, trying their best to patch together shards but this highly individual style is Henry Trevor’s most un-Victorian original. “Nothing matches, but that’s the charm of it,” says Rosamund Inglis. “It’s like a patchwork quilt.” Thirty-five years of voluntary hard graft have seen most of the ivy gone. The fountain twinkles once more in the late afternoon sun. The Italian Terrace snakes up the steep far bank and the formal flowerbeds have returned. “In Trevor’s day they would have been filled with thousands of bedding plants,” says Roger Connah. It’s not possible to emulate this extravagance today, but seasonal plantings still lend a 19th Century flavour. It’s also proved impractical to replace the lost Palm House, but a delightful rustic summer house has an exact replica, the original wooden bridge from the house has been recreated and a quirky retaining wall lovingly restored. “We collected all the bits and pieces and made them to match,” says Rosamund Inglis.

For all its careful restoration, the garden is not frozen in time. “We aim to act in the spirit of Henry Trevor,” Inglis continues, pointing to some newly-commissioned gates, a jumble of galvanised metal flowers. They created some controversy when first unveiled, as being too contemporary but Inglis is sure they did the right thing by the garden’s original maker. “He wouldn’t have stayed the same. He’d have been looking for new things.” 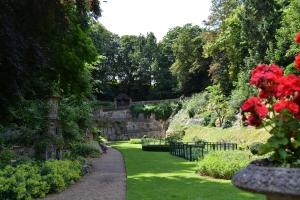 Plantation Garden was never huge, thanks to the constraints of the original quarry, but serpentine walks through denser woodland than Trevor would have known and clever use of height, terracing and levels give the impression of a far larger garden. Because it is so very sheltered, and, thankfully, not a frost-pocket, many of the more tender plants can be left out all year. Banana trees are given a winter coat and left to their own devices. Tree ferns are cut back, but not taken inside.

By late summer, the Victorian-style plantings come into their own. Verbena bonariensis towers above black-leafed dahlias and ornamental oats. Diamonds of dew collect in carpets of Alchemilla mollis and sparkle on spiders’ webs stretched between fiery cannas. Plantation Garden has earned its place in Norwich’s top ten visitor sites because it remains a garden for the people of the city. A programme of summer events, afternoon teas and home-made treats supplied by no fewer than 80 ‘cake ladies’ has brought the garden to the people the same way Henry Trevor intended. Yet, for my money, and however much Roger Connah may protest at the word, this quiet haven manages to remain a delicious secret to be discovered and enjoyed as you slip through those flower-tangled metal gates.

This feature originally appeared in the Daily Telegraph. If you would like to syndicate it or commission Sandra to write something similar, please email at the following address, missing out the obvious gap: