Yeah, well, I had to give it some kind of title and the spade looks faintly sinister. ‘Installing fake Victorian rope edging I found in a skip’ didn’t really cut it.

It’s true though. My street’s being ‘regenerated’ at a rate of knots and skips keep appearing, filled with all kinds of stuff that is SO last season… 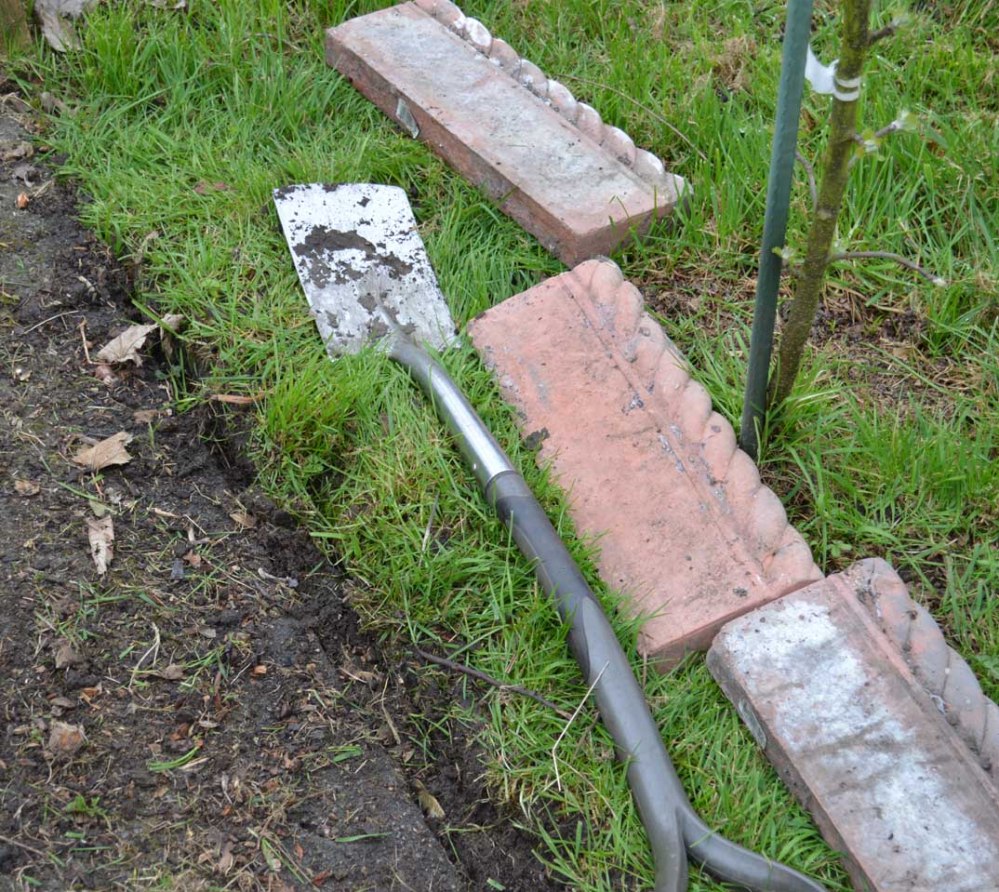 I hauled out a couple of bits of York stone (!), nearly giving myself a hernia before the builders took pity on me, delivered the rest of it to my front garden and started flagging up juicy bits of wood they were going to toss out that I might like. I repaid them with copious cake; it was a symbiotic relationship – I must have saved them a good skip’s worth of roof beams, plastic garden chairs and, of course, rope edging but they still ended up sending about 12 skipfuls to landfill, a good half of which could have been used by someone.

I asked them why they didn’t sell at least the York stone on ebay; they said they couldn’t be bothered.

I’m not exactly gutted, it made a fantastic path in my back garden and I still had some left over for other projects/to give away. I’d planned on gravel as all I could afford; the Skip Goddess provided at just the right time. But it does bother me just how much good stuff goes into landfill. If I have no further use for stuff I always try to Freecycle it – or often just leave stuff on the path outside my house and it disappears.

The wood, along with beams from another neighbour (thank you Mick!) became raised beds on the plot, the plastic garden chairs see service every weekend and countless other bits and bobs have all been pressed into action.

Last weekend was the turn of the rope edging – 30 pieces in total, plus two broken ones. I had enough to help shore up Project Patio, fill in the bits at the top of the plot where the mulch tumbles down very sloping paving stones from my neighbour’s plot onto mine and fill in the bit on the bank, stopping that bit of hill from falling onto the path too.

One of the many downsides of having what is a nice-enough-sycamore-but-a-bit-of-a-nutrient/water/light drain  next to me, is that the roots are the size of my wrist. It took half an hour to saw through the biggest. Clearly despite being similar diameters, my wrists are not as strong as the sycamore’s roots.

It’s not the neatest job. The paving slabs of the path really need relaying, but I can’t lift them, let alone re-position them, so they’ll have to do. And let’s face it – it’s an allotment, not a Chelsea show garden.

In other news I finally planted my chitted potatoes – International Kidney and Charlotte – and fiddled about with seedlings indoors. Sunflowers, chillis, tomatoes, cucumber and melons all doing well….

A good weekend well spent. Am I smug or am I smug?