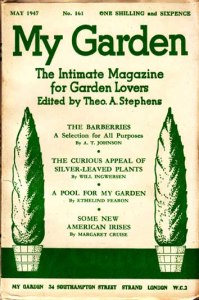 The other day I picked up an old gardening magazine, My Garden, from 1947. It’s a curious little beast, about A4 size in today’s measurements and, given that Britain was still heavily rationed, an austere read in comparison to the glossies we read now. Mainly text, there are a few illustrations, some black and white photographs and one colour photo, of some rather unprepossessing berberis.

In a magazine of just 100 pages, there are no fewer than four adverts for biscuits. Sweet cartoons of land girls sharing a well-earned break with a local farmer, chic young housewives with well-fed children, and smart Royal warrants proclaiming Britain’s best.

These manufacturers know their market. It’s true. Gardeners like biscuits. I am partial to a custard cream myself. Except that this is 1947. There aren’t any biscuits.

These biscuit makers are advertising goods that readers can’t actually buy. The war might be over, but rationing is still in full force. Land girls are still digging, though now it’s for survival, rather than victory*. However much you may want to test out Macfarlane Lang’s Best, Weston’s fine quality or a tempting Chocolate Wycombe, you can’t, or at least not without hoarding your coupons and hoping against hope that the grocer actually has a few in stock.

So why are producers spending money on advertisements for things money can’t buy? Simple. Any time now, rationing is bound to end and when it does, they want to be the brand gardeners keep in their sheds for those heavily-spun breaks.  Like lipstick manufacturers during the war itself, they don’t want to be forgotten.

Take a look at the language. Weston’s claim the ‘finest ingredients obtainable‘ – presumably they were making something, out of some sort of ingredient – just don’t expect them to be made out of the usual butter, sugar, eggs, flour etc. Some of those wartime cookery books were very inventive.

The lady talking to Mary Jane in the Chocolate Wycombe ad is imagining a future where her daughter will know what chocolate actually tastes like. “You deserve a bit of luxury in these days of austerity.” The claim at the bottom of the ad “The grocer is getting supplies but they’re so extremely good they go very fast” is an understatement. Biscuits were rationed from 1942. Chocolate biscuits didn’t come off the ration until 1950.

Perhaps the most honest of all is good old Peak Freans. Their little jingle is enough to sadden the hardest gardener’s heart:

How nice it would be to be able to say

‘We’ve biscuits for all – any kind, any day’

But the thought that’s beginning to keep us awake

Is that people may even forget what we make.

Next time you’re taking a teabreak, as you’re sinking your teeth into that fifth chocolate Hobnob, raise a mug to the doughty gardeners of 1947, who could only dream of such luxuries…

*I only recently discovered the Women’s Land Army continued after the war when I looked at the label inside my original breeches and was surprised to see they were from 1948. The WLA wasn’t officially disbanded until 1949.