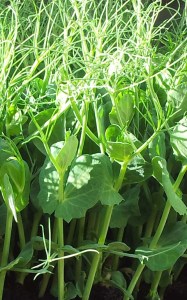 Ever since I read the ever-excellent Naomi Schillinger’s column in Grow Your Own last year, I have been growing pea shoots. I read it after experiencing a week’s worth of  pea shoots decorating every meal I ate on holiday in Nottinghamshire (I don’t think it’s anything to do with that area of the country, just that they are bloomin’ omnipresent on chefs’ shopping lists just now.)

I fancied growing pea shoots myself – they’re so tender and tasty – but it wasn’t until Naomi’s piece that I put two and two together. I didn’t need to buy expensive ‘pea seeds’ – these shootlets were never going to get big enough to become ‘varieties’ in themselves.

Naomi suggests getting a bag of bog-standard, dried marrowfat peas from any old corner store. Soak half a cupful overnight.

Next day, just put an inch or so of soil in the bottom of a tray. It can be rubbish soil as all it’s going to provide is a growing medium. Sow the soaked peas thickly, cover with a thin layer of soil and leave outside to grow (not on the ground or the mice will get it.)

About eight days later, you’ll have a happy little box of pea shoots. Naomi Schillinger reckons you can leave them for a second cut after your first shearing, but I found the second flush, though it grew well enough, became tough and unappealing. I just shot the lot into the compost bin and started a new batch.